My 2021 New Year’s resolution was to make more driving tours this year.  Accordingly, I set off on January 23 END_OF_DOCUMENT_TOKEN_TO_BE_REPLACED

Back at the beginning of March 2020, it was becoming apparent that the new coronavirus would cause major disruptions in END_OF_DOCUMENT_TOKEN_TO_BE_REPLACED

Having purchased a new Mercedes-Benz SL550 in September, it seemed fitting to use it to seek out Fall Colors in Pennsylvania and Maryland. From Gettysburg to Boonesboro, I found a lot of them—and also a generous helping of interesting history along the way.

As I motored alongside the Susquehanna River in my 2007 Aston Martin V8 Vantage, at almost every turn there were reminders of the fierce rivalries and strife that existed in this area over a period of centuries.  Susquehannock and Seneca END_OF_DOCUMENT_TOKEN_TO_BE_REPLACED

Okay, as far as I know, Princeton, New Jersey isn’t really accursed.  But after reading by Joyce Carol Oates, I END_OF_DOCUMENT_TOKEN_TO_BE_REPLACED

Driving through the Catskills Mountains in New York is always fun, with a great selection of interesting roads, unending beautiful scenery, and lots of history to explore. This particular trip was well out of the ordinary, however. I somehow ended up hundreds of feet higher than my car’s location at least twice, and I also stayed overnight in Miss Kitty’s Saloon. And then there was the abduction of Trudy Truelove… But as usual, I’m getting ahead of myself.

After a long, wintertime layoff from touring, it was time to put aside the income taxes and get the valiant BMW 335i convertible back out on the road. My goal was to visit some new spots along the original National Road in western Maryland and southwestern Pennsylvania—and to break an automobile hill-climb record that has stood for 105 years. Along the way, I found a Half-King, a Half-Brother, and the usual amount of scandal, murder, and mayhem. What more could I ask for?

Being long overdue for another BMW road trip, I eagerly set off in late September for a tour of Virginia’s mansions, a search for a lost river, and to ponder the nature of yesterday’s heroes. As one of the oldest colonies, Virginia has a wealth of history—much of it in plain sight, but some of it lost in the hills and valleys.

You all know the old joke, right? “Why does New York have all the lawyers and New Jersey all the toxic waste sites? Because New Jersey got first choice.” Well, New Jersey gets a bum rap; it actually has at least several scenic or historic places that are perfect for exploration…

Okay, all joking aside, it actually has hundreds or even thousands of such places, and I managed to find quite a number of them.

Only an idiot would look for Fall Colors on the first day of Spring. And certainly no BMW owners are idiots. So what was I doing on March 22, 2017 driving through acres of snow in Pennsylvania looking for Fall Colors??

Nothing eats up miles faster than a turbocharged BMW. Not everyone would agree with this statement, but, to quote Mark Twain, “The rule is perfect: in all matters of opinion our adversaries are insane.”

On this trip, I was looking for the “cottages” of the rich and famous. It took 3 hours to get to Haskell, New Jersey—and shortly thereafter, I was on foot and hopelessly lost in the woods. 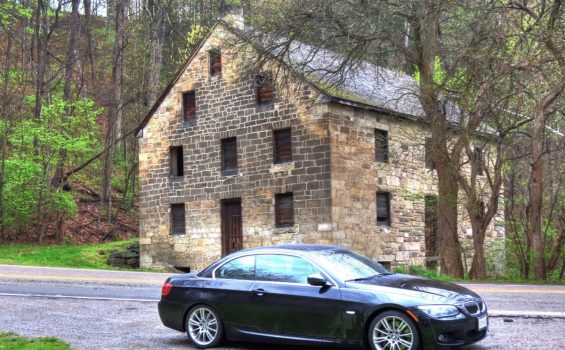 “Vengeance is mine, sayeth the Lord.” In the late 1700s, neither the American Indians nor the colonial settlers paid the slightest attention to this well-known scripture. I thought of it often as my best friend Buzz and I toured Ohio, searching for the locations of once-great Native American villages and finding the many areas where brutal depredations were traded between the warring parties. Vengeance was repeatedly sought—and found—by both groups. 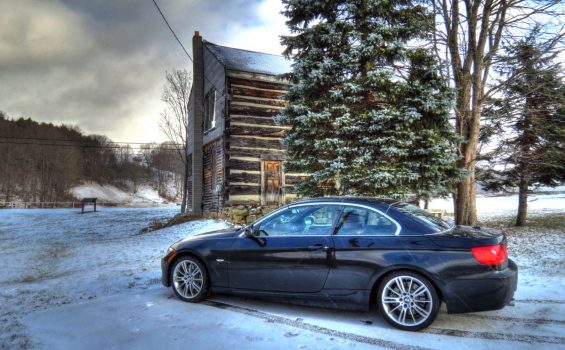 Looking over the side of the road at the tops of trees, it was easy to imagine that I was on the very roof of the world. The absence of guardrails, and the toy-like appearance of farms and cows far below, only reinforced this impression. In reality, the elevations were only a fourth of so of the roads I’ve driven in the Alps, but the impression was no less vivid. West Virginia is still one of the most visually vertical places anywhere, and that implies that it also has some of the most interesting roads anywhere!

I know that my BMW 335i is a mechanical object, devoid of personal feelings. Yet I sensed that this extraordinary car shared my excitement at—finally—setting off on another road trip. What else would explain its over-eagerness? A slight push on the accelerator unleashed far more power than I intended, and the car urged forward at a faster pace through every corner. Such are companions in adventure.

You might well ask what I was doing, driving my pristine 2013 BMW 335i convertible up a steep hill through a cornfield… Well, it was all in a day’s work in my continuing pursuit of lost and forgotten history—and great driving roads.

I stood on the banks of the Hudson River, just across from New York City. But I wasn’t after cities—I was searching for Lavender, Sam, and Alice. Poor, lost Lavender would be the hardest to track down: she became the protagonist of America’s most enduring ghost story back in the 1940s. Sam was one of the country’s best racing drivers in the 1960s and 1970s. And Alice was a colorful and free-spirited counterculture icon in the 1960s, immortalized in Arlo Guthrie’s magnificent song “Alice’s Restaurant Massacree.”

West Virginia is justifiably famous for its mountains, rivers, and (among driving enthusiasts) its superb mountain roads. My goal in late April was to sample more of these roads—and to see what was left of the coal mining industry that used to predominate in the southern part of the state. In addition, I was pretty sure that I could find a good story or two among the forgotten towns and beautiful rural scenery. In the process, I went far underground twice (although the BMW stayed topside and out of trouble, for once!)

Wherein Yr Fthfl Srvnt recounts the second day of exploring the New Jersey Pine Barrens in his intrepid BMW 335i, on some of the worst roads imaginable. Fortunately, no BMWs—or Fthfl Srvnts—were harmed in the making of this story.