Another motorcycle journey with Neil Peart was too good an opportunity to pass up. Our first outing, a year earlier, had been an epic adventure. The fact that this should have been a Play In Three Acts will become apparent as I proceed with the story.

It’s with a certain amount of trepidation that I write a ride report about Virginia. After all, many of my most regular readers live in Virginia and routinely ride through virtually every corner of the State. By comparison, I’ve only motorcycled through small parts of it. Fools rush in, however, so here we go…

As regular readers will remember, I periodically get together with my college roommate Buzz for a long weekend ride, starting somewhere roughly halfway between Wooster, Ohio and Catonsville, Maryland. This time, the chosen starting point was Philippi, West Virginia. The weather outlook for June 20-23 wasn’t entirely reassuring, with a 50% chance of thunderstorms on Saturday and Monday, but we decided to give it a try.

A couple of months ago, the irrepressible Hello Kitty (a.k.a. famous Iron Butt competitor Nancy Oswald) asked me if I would design and lead a “scenic tour” for the 2008 Square Route Rally, held by the BMW Bikers of Metropolitan Washington (BMWBMW). Naturally I agreed, since there are hundreds of scenic roads, views, towns, rivers, structures, etc. within a stone’s throw of Thurmont, MD. I was pleased to accept, although I asked that we limit the tour to 6 riders since my experience leading group rides is limited. Eventually, I had a suitably scenic, 139-mile, 62-turn SRR route established. But about the weather… 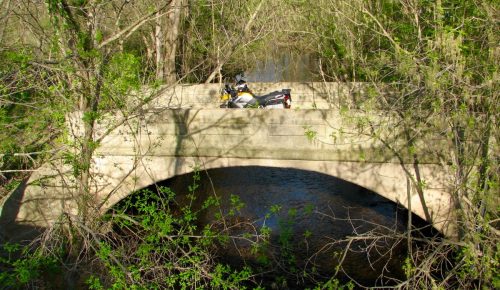 As I write this, I should be in the middle of West Virginia, motorcycling with the indefatigable Buzz–but it’s raining there, and we’ve postponed the trip. As a result, I have a chance to write up last Friday’s 310-mile ride through various parts of Virginia (with some Maryland and West Virginia thrown in for good measure).

For some time now, I’d been wanting to return to Oldtown, MD for further exploration. It’s an area that’s rich in history, and it promised to be scenic as well. This past Easter Sunday I set out to see what I could find, and I wasn’t disappointed.

My sister-in-law gave me a copy of Manhunt by James Swanson for Christmas, and I found it to be a very interesting account of John Wilkes Booth’s assassination of Abraham Lincoln and his subsequent escape from Washington. Since much of his escape route was through Maryland, I promptly made that my next destination for a GS ride.

Somehow, between bad weather and a never-ending sinus infection, I hadn’t gotten out for a ride since just after Thanksgiving. Thus, as Sunday, January 27th, approached, I was more than ready to get going. The weather forecast was for scattered morning snow showers and a high of about 35 degrees. My goal for the day was to find the Killiansburg Caves along the C & O Canal. I read about them in A Guide to Civil War Sites in Maryland, and they apparently sheltered a number of townspeople from Sharpsburg during the Battle of Antietam.

After a frenetic trip to visit my in-laws in Boston for Thanksgiving, I was more than ready for another motorcycle sightseeing adventure. The only available day, however, was Saturday, November 24–with a predicted high temperature of only 40 degrees. When I set off at 9:00 am, it was all of 28 degrees. Fortunately, with the Gerbings heated gear set to “Broil,” I was plenty comfortable. My destination was the historic Oatlands Plantation, near Leesburg, VA.