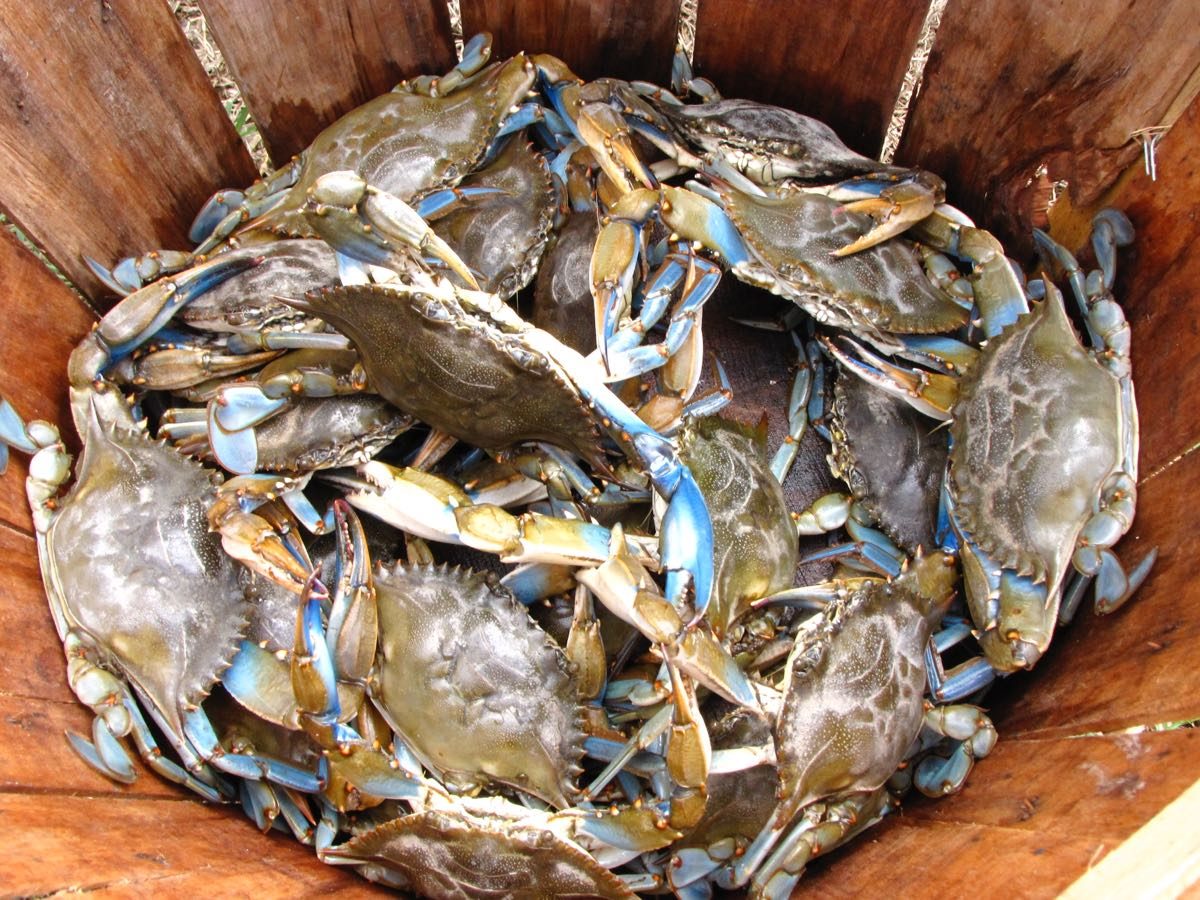 There’s something very compelling about trying to track down remote bits of past history. Sometimes you find them and often they’re just gone. Any disappointment with failing to discover them is usually more than made up for through locating unexpected treasures. And you can always vow to try again another day.

So it went with my recent return trip to Delaware. My planned route was a combination of one shown in Day Trips in Delmarva by Alan Fisher and some intriguing historical clues I stumbled across in Delaware: A Guide to the First State on Google Books. This 549-page guide was written in 1938 and offered an array of interesting-sounding historical goals for the area I’d be visiting.

This part of the U.S. isn’t what you would call ideal sports car country. It’s fairly flat, many of the roads run dead straight for miles at a time, and the only racetrack anywhere near is the steeply banked NASCAR track in Dover—not open for track days, to the best of my knowledge. Nonetheless, the Z4 makes a great touring car for my purpose. You can look around and spot interesting sights much more easily in an open roadster, and it’s always fun to go accelerating away from the most recent stop, listening to the willing engine and shifting up through a smooth 6-speed. Such fun.

My first stop was Odessa, DE, once a thriving port for grain shipments on the Appoquinimink River. By the mid-1800s, however, it was bypassed by the new railroad, and its industrial aspect has all but disappeared—leaving numerous historic houses, dating back as far as 1700. I arrived at about 7:30 am, long before most of the town was up and about. Odessa’s wide Main Street was lined on both sides with imposing mansions and more modest houses. Here, across from the faithful Z4, are the 1854 Bank of Delaware (now an antique shop) and the 1822 Brick Hotel (now a museum, part of the Winterthur collection).

Walking around town, I was torn between watching the uneven brick and cobblestone sidewalks carefully or enjoying the beautiful houses and gardens.

The Corbit-Sharp House, from 1774, is also part of the Winterthur Museum, and your admission to the Brick Hotel includes this house and two others—but not at 7:30 am, I’m afraid.

This is the Wilson-Warner House from 1769, with a stable out back.

When I first saw this object, I thought a very small flying saucer had landed. Closer inspection revealed a very large mushroom.

When I returned to my car, I encountered the owner of the “Leftovers House” and had a pleasant conversation with her about the history of the town and its restoration. She began by saying how much she “loved my car” and invited me to tour the yard for January House, where her parents live, and even called over to make sure it was all right. It was, and I did. Along their driveway, I found this odd-looking object, with what appeared to be a charred ember inside the basket. Before long, I realized that this was a pre-electricity driveway lamp!

The Old Drawyers Presbyterian Church sits just north of Odessa, overlooking Drawyers Creek (known locally as “the marsh”). Its congregation dates back to the late 1600s, and this church was used from 1773 through 1861.

My guidebook said that the Old Drawyers Church was open once a year for services, on the first Sunday in June. As luck would have it, the date had since been changed to the last Sunday in August—the exact day that I happened to be there! With the service not due to start for another hour, the caretaker welcomed me into the church and encouraged me to also visit the unrestored balcony area. The interior was striking in its simplicity. And remember the “pre-electricity” comment? The church has none, so the organist gets a workout on the pedals.

Behind the church, the marsh extended as far as I could see. It provides outstanding fishing, I’m told.

The tiny Appoquinimink Friends Meeting House was built in 1785 and sits well back from the road as you leave Odessa. Its loft was a frequent hiding place for runaway slaves using the “underground railroad” to escape north.

As I passed through neighboring Middletown, I had to stop for a picture of this quaint building, which now houses an unruly collection of shops and offices.

Following the Delmarva guide, I crossed back into Maryland and found the Old Bohemia Church right where it was supposed to be, having stood there since about 1790. My official guide for the tour was a friendly dog, who encouraged me to follow him all around the church, graveyard, etc.

Sometimes the road just ends… Fortunately, the occasional drizzle had stopped and it was a good opportunity to put the top down.

Worsell Manor was granted in 1683, back when the Baron Baltimore could do pretty much whatever he wanted. The subsequent plantation house is still lived in but is hidden behind vegetation, but the barns are visible from the road. George Washington is known to have slept here at least once (the house, that is, not the barn).

Almost nothing is left of Sassafras, Maryland—once a small but thriving village. I discovered the Sassafras General Store without difficulty…

…but I was primarily looking for the old Rehoboth Methodist Protestant Church, built in 1859 but abandoned in the late 1990s. In a sad case of history lost, I learned from a local resident that the church burned several years ago. All that’s left is a memorial and the church’s cemetery.

Just outside of Sassafras, the Rich Levels farmhouse still stands proudly. The first 2 stories were built in the mid-1700s, with the third one added roughly 100 years later. It’s now a private residence, and I received a friendly wave from its current owner.

Crossing this railroad track, I realized that it was the railroad that bypassed Odessa, dooming its industry and leading to its quiet life as a beautiful scenic village. I suppose it’s best not to second-guess history.

I didn’t have enough time to explore Smyrna, Delaware, to the extent that it merited. Its history is similar to Odessa’s, except that it successfully transformed its grain-shipping and other dominant industries into manufacturing, which continues today. Smyrna has its share of impressive dwellings…

…and this unusual building sits right at the site of the original Duck Creek Crossroads (later known as the Four Corners).

Leaving Smyrna, I headed east and quickly encountered the marshy coastal area bordering the Delaware River and Delaware Bay. The weather was perfect, the roads were empty, and you could stand in the middle of one of them to take pictures just about anytime.

In searching for information on the “Huguenot House,” built in 1711, Google took me to the aforementioned Delaware: A Guide to the First State from 1938. An adjoining page had this drawing of Leipsic, DE, featuring a riverside church and schooner. Naturally I added Leipsic to my route and hoped to find this church and its scenic setting.

Leipsic proved to be an interesting little fishing village (where something like 43 of the 100 or so heads of households have commercial fishing licenses)—but the church had apparently fallen victim to one flood too many. Substituting for this lost history was an active fisherman’s dock on the Leipsic River (formerly Little Duck Creek).

Here I bumped into Frank and his two sons, who immediately said they “loved my car” and who had a number of crabpots tethered to the dock… 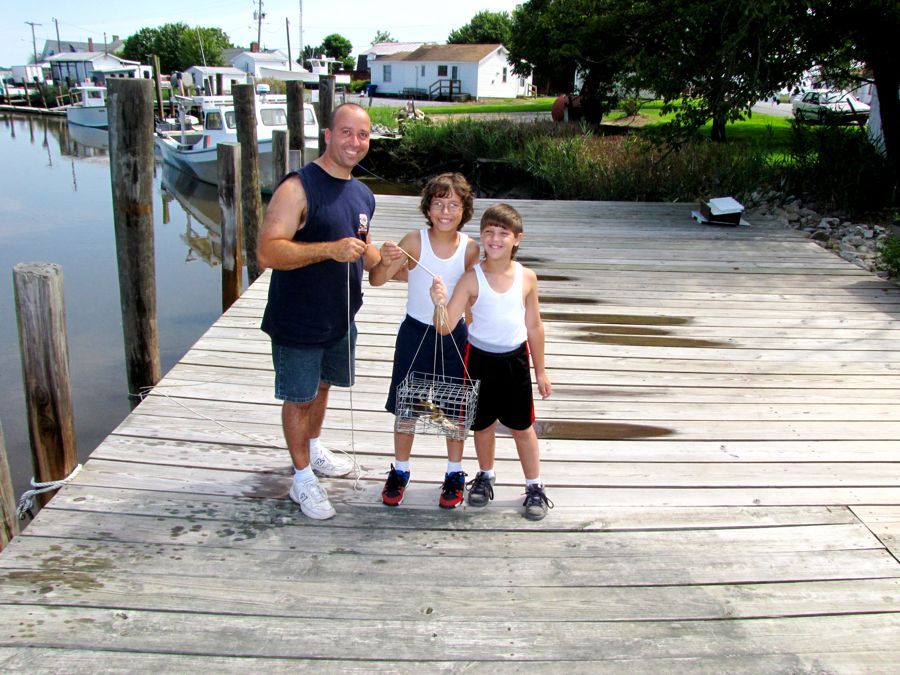 …and who were having pretty good luck, judging by their catch so far.

Although disappointed not to find the church shown in the drawing, I was pleased to locate the Roby United Methodist Church. It was built in 1865, following a dispute between Union and Southern sympathizers among the original congregation. Each group ended up with its own church, although only this one appears to have survived. (Perhaps the original had been the one pictured in the drawing?) The Roby church’s belltower was destroyed by Hurricane Hazel in 1954 but rebuilt with the original bell. Call it “history recovered.”

The entrance to the Bombay Hook Wildlife Refuge, and its 1753 Allee House, hadn’t opened yet, so that tour will have to wait for another day. But it afforded me the opportunity to photograph a scenic BMW Z4:

Fortunately, everywhere I turned there were additional back roads to explore…

…scenic marsh ponds (“Wire Gut Pond” in this case; where do these names come from?)…

…and the one-room Taylor’s Bridge School, built in 1923 to replace the existing school that had been flattened by a storm.

Along the way, I went searching for another intriguing historical site mentioned in the 1938 tour guide. Read this item for yourself and judge whether you could resist searching for it:

Before the trip, I’d spent some time on Google Maps trying to decipher the 71-year-old directions. As best I could determine, the “side road” was now an individual’s private driveway. But the satellite view revealed two possible places nearby that could be the hotel ruins, and I vowed to drive up to the house, knock on the door, and inquire about the ruins. The best laid plans… The private driveway turned out to belong to the Delaware Division of Fish & Wildlife—and it had a securely locked gate across the road. If I’d had more time, and if it hadn’t been so hot, I would have hopped the gate and walked the 1.1 mile to see what I could find. Would ‘a, could ‘a, should ‘a… I vowed to write the DDF&W and determine whether this bit of history could be found or was destined to remain lost.

A tall, cast-iron beacon dominates the area surrounding Taylor’s Bridge. It provided navigational assistance for ships plying the Delaware River in the mid-1800s (at a distance of 3 miles—what sort of light did that take back then??)

Taylor’s Bridge itself crosses Blackbird Creek and hosts numerous fishermen and women. One friendly couple had just caught this foot-long eel. (Everyone in unison: Yuck!) The man told me that his grandfather would routinely eat these things 30 years ago, but that he, himself, wasn’t anywhere near that hard up. (They also complimented me on the Z4, but by now this was becoming routine. It is a dramatic-looking sports car, I must say.) 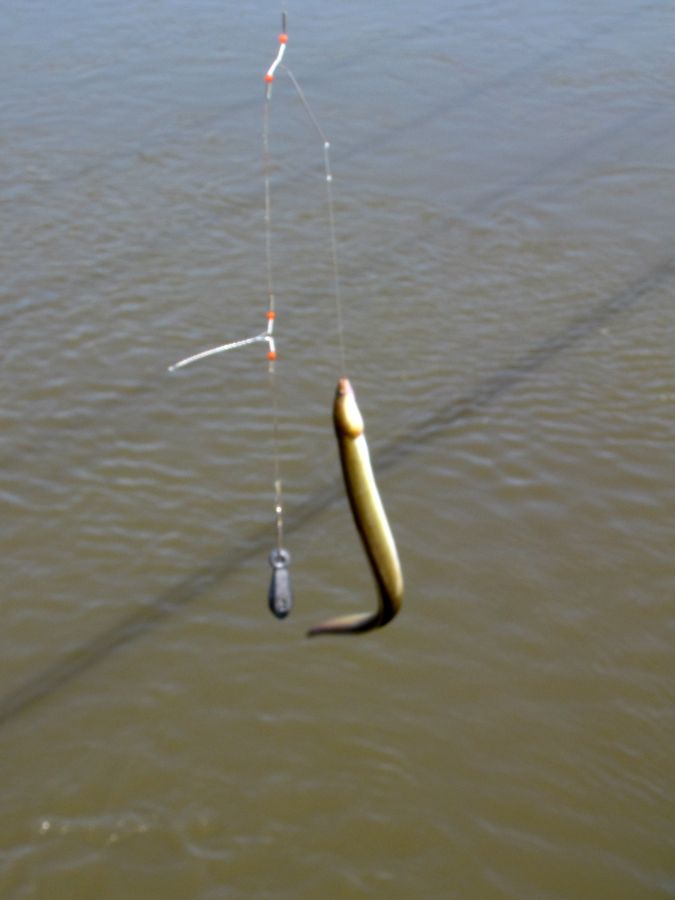 With my tour of Odessa and its vicinity almost finished, I made one more stop to photograph the Appoquinimink River. My vantage point happened to reveal a series of old pilings—with healthy vegetation growing happily from the weathered wood! 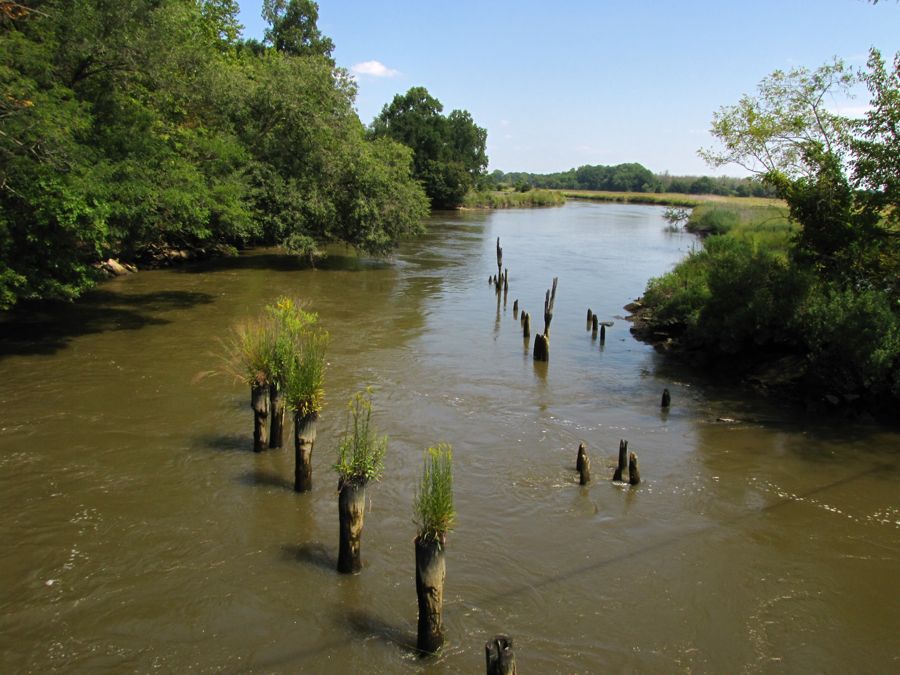 And never forgo the opportunity to get one more picture of your trusty transportation:

It was now time to go rushing back to Catonsville for a brief meeting with a friend and to pick my wife up at Baltimore-Washington International airport. But first I needed to make one more stop. On my previous trip to Chesapeake City, MD, at the end of the Chesapeake & Delaware Canal, I’d spotted a great photo opportunity while crossing the Route 213 bridge over the canal. I made a mental note to return some time for the picture—and this was the day.

I parked under the bridge, walked a quarter mile, clambered up a very steep embankment, and hiked a half mile uphill to reach the top of the bridge. (The things I do to get pictures for you all!) Along the way, I discovered that there was a helpful shortcut in the form of a staircase that the engineers had thoughtfully provided for (informed) sightseers. I took advantage of it on the return hike.

But the hike was worth it, with a view that was even better than I remembered from my fleeting glance a month earlier.

All told, I “found” boatloads of history in this region. Only a little history proved to be “lost.” And some remains to be rediscovered at the next opportunity.

This site uses Akismet to reduce spam. Learn how your comment data is processed.