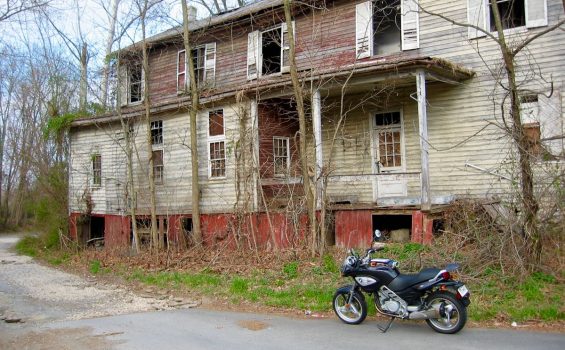 Yesterday I went out to Montgomery County, Maryland, and thoroughly enjoyed looking for abandoned buildings/houses/mills/etc. for a photo contest on the BMW F650 discussion board. There were a bunch of them, and I even recognized one place from my (first) childhood.

Last weekend I rode my faithful BMW F650CS out to the Antietam Battlefield area at Sharpsburg, Maryland–first to visit “Sharpsburg Arsenal,” which is a Civil War artifacts shop that also doubles as a museum, and then on to the Potomac River and other sites. Along the way, I stopped at the Kennedy Farm, which was the home of John Brown (of Harper’s Ferry fame) and his family. And I also found Dam No. 4 on the Potomac. Prior to this ride, I didn’t even know there were any dams on this river.

While waiting for a sufficiently warm day for a ride (i.e., above 35 degrees in my case), I started looking on the map for an interesting place to visit. I found Churchton, on the western shore of the Chesapeake Bay, south of Annapolis and directly east of Upper Marlboro.

I assumed it would be an interesting old town, with a harbor and a good place for lunch. When I rode there on Sunday, however, as best I could tell it doesn’t even exist!

Jim Von Baden’s “One Special Picture” thread has prompted me to add another couple of shots from my ride on January 22. It was so great to have an opportunity to get out, after I’d put the F650CS away for the winter. Although it never got over 40 degrees, I bundled up and did okay, other than cold hands. Along the way, I discovered my all-time favorite abandoned house.

Here are a couple of Fall Color pictures, one from last weekend, three from earlier today. Hey, it’s pretty out there!

The latter trip was from Catonsville to Emmitsburg, Maryland by back roads. I had a reasonably decent lunch at “Palms” in downtown Emmitsburg, and by chance I ran into a high school friend whom I hadn’t seen in roughly 38 years!